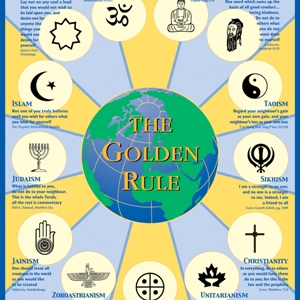 The Golden Rule
Or
The Ethic of Reciprocity

“Every religion emphasizes human improvement, love, respect for others, sharing other people’s suffering. On these lines every religion had more or less the same viewpoint and the same goal.”
~ His Holiness the Dalai Lama

The Golden Rule
“Do onto others as you would have them do onto you.”

“This is the sum of Dharma [duty]: Do naught unto others which would cause you pain if done to you”.
~ Mahabharata, 5:1517

“Hurt not others in ways that you yourself would find hurtful.”
~ Udana-Varga 5:18

“Don’t do things you wouldn’t want to have done to you.”
~ British Humanist Society

“A man should wander about treating all creatures as he himself would be treated.”
~ Sutrakritanga 1.11.33

“What is hateful to you, do not to your fellow man. This is the law: all the rest is commentary.”
~ Talmud, Shabbat 31a

“All things are our relatives; what we do to everything, we do to ourselves. All is really One.”
~ Black Elk

“The law imprinted on the hearts of all men is to love the members of society as themselves.”

“Be charitable to all beings, love is the representative of God.”
~ Ko-ji-ki Hachiman Kasuga

“Don’t create enmity with anyone as God is within everyone.”
~ Guru Arjan Devji 259

“The basis of Sufism is consideration of the hearts and feelings of others. If you haven’t the will to gladden someone’s heart, then at least beware lest you hurt someone’s heart, for on our path, no sin exists but this.”
~ Dr. Javad Nurbakhsh, Master of the Nimatullahi Sufi Order.

“We affirm and promote respect for the interdependent web of all existence of which we are a part.”
~ Unitarian principles

“An it harm no one, do what thou wilt”

“One going to take a pointed stick to pinch a baby bird should first try it on himself to feel how it hurts.”

“Whatever is disagreeable to yourself do not do unto others.”
~ Shayast-na-Shayast 13:29

©2008 Humanity Healing. Permission to use with proper credit given.