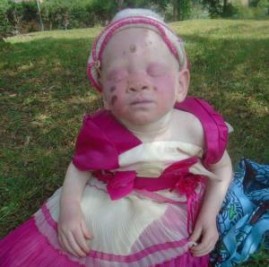 Evelyn Atukwasibwe is one of the original 10 albino children rescued from traffickers in December 2013, which began the HHI Albino Rescue Program. Evelyn was 3 months old at the time. Evelyn’s father had driven Florence, her mother, out of the house for birthing a “demon”. Since Evelyn is too young to attend school, HHI found Florence and Evelyn a place to stay, helps support the needs of Evelyn and will enroll her in school when it is time.

On the night of 25 January, two men approached the house where Evelyn and her mother were living and attempted to gain entry, but failed. There was a second attempt on the night of 28 January, which forced Florence and Evelyn to flee and hide for the child’s safety. Through a Good Samaritan named Violet, she was able to send word to Michael Sabiiti, Country Director for Humanity Healing International and Founder of SCOSP, of her predicament. Michael immediately set off with one of his team.

Florence was unaware, however, that the men had followed her. In the middle of the village of Namabale, the two men accosted Florence and tried to pull Evelyn out of her hands. Florence began to scream and when Violet and others came to help, the two men took off running. Florence and Evelyn hid in Violet’s house to wait for Michael.

Every Cloud has a Silver Lining

Michael had difficulty locating Evelyn and Florence initially, as he did not know the exact location of Violet’s house. While searching, he stopped to ask two children who were harvesting sweet potatoes if they had seen a young woman carrying a “white child”. They had and were able to direct him to Violet’s house. To Michael’s surprise, they also told him they had seen three other “white” children running by their village.

Michael took Florence and Evelyn to the Sub-County Leadership to report the attack against them and left them in official care while he went to look for the other albino children he had learned of.

Our sincere Gratitude to Michael for his heroic efforts. Evelyn and Florence have been relocated and we will continue to keep a watchful eye out for their safety.

For more information about the rescue of the other children, please read The Rescue of Bonitah.

A kidnapping attempt by two men of an albino toddler highlights the seriousness of the trafficking of children with albinism. As long as there is a demand for Albino children and/or their body parts for sacrifice and use in “black magic” rituals, Evelyn will never be truly safe. Our mission is to not only provide a safe environment and a chance for children like Evelyn to grow and learn, but to also raise awareness of this stain on humanity and create change in how persons with albinism are viewed in society. It is a slow process, but we are making progress.

You can give a child with albinism a chance to grow, get an education, and provide a living example that albinism is not a curse, just a different face of humanity. Sponsorship is only $30 per month.