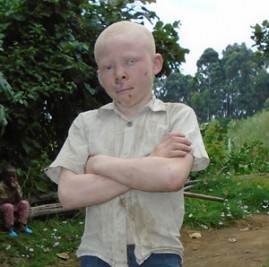 The Plight of Albinos

Living in Fear: The Plight of Albinos

Albinism is a hereditary Genetic condition that causes an absence of pigmentation in the skin, hair and eyes. Albinism affects one in 20,000 people worldwide.

The Tragedy of the Albinos is one based on the belief that certain body parts of people with albinism can transmit magical powers. Young children are often the victim because they are relatively easy to abduct.

Since the year 2000, According to The United Nations estimates, 75 albinos have been killed and the frequency of the attacks on them seems to be increasing the past couple of months.

The UN report submitted as part of the Human Rights Council resolution 23/13 of 13 June 2013 states that they are often regarded as “ghosts and not human beings who can be wiped off the global map.

A World of Prejudice and Misunderstanding

In Tanzania, albinos represent one in every 1429 births, a much higher rate than in any other nation. According to Al-Shymaa Kway-Geer, an albino member of parliament, there are 6977 officially registered in Tanzania.[8] However, it is believed that there may be up to 17000 undocumented.

A report was released on April 1, 2014 by the Canadian organization “Under the Same Sun” based in Dar es Salaam, Tanzania. Titled “Reported Attacks of Persons with Albinism”, the document reviews 180 countries and lists 129 recent killings and 181 other attacks, all within 23 African countries. These attacks include mutilation, violence, grave violations and cases of asylum-seeking.

In Sub-Sahara Africa (especially Uganda), ritual mutilations and ritual murders occur regularly. According to the head of the country’s Anti-Human Sacrifice Taskforce the child sacrifice is directly linked to rising levels of development and prosperity, and an increasing belief that witchcraft can help people get rich quickly.

The media attention has put the government of Uganda under pressure to be seen doing something about the issue of child sacrifice and has resulted in the formation of an official government taskforce to deal with this evil in Ugandan society.