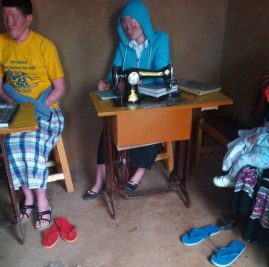 The reusable pads project started with 120 needy girls and 10 poor women with HIV/AIDS.  We are proud that enrollment has increased to 160 needy girls. In addition, 3 mothers of albino children who were rendered homeless and helpless, are now learning sewing skills.  The project beneficiaries are being better prepared to be trainers of the other many girls who will be trained in the future.

In addition, 6 Albino youth are also enrolled and one Albino university student, Florence Tumushime of Kabale university, are also taking the pads kit training. This was done to encourage those with a negative mindset that sewing is for the academically challenged. This has motivated many additional girls, but we are limited by the space for conducting the training and the machines.

From the original investment, we have maintained two instructors who are working 8 hours per day.  In addition to five sewing machines, yards of cloth, meter rulers, tape measure, pencils, furniture such as chairs and cutting tables, stationery were purchased and the trainees have all they need to concentrate in the skills training.

The first batch of reusable pads kits were made by the girls as part of their sewing training. We are proud to receive feedback from the initial users that so far the 60 girls have not missed any single school day during their menses because of the reusable cotton cloth sanitary pad that we have branded Joy reusable cloth pad –  shortened as JOYPads.

We started this test with the beneficiaries to ensure that when the girls in our program distribute to other girls in school as part of their service to others and paying it forward, they know that the pads are high quality and a fine product.  Only 4 of the original batch of reusable pads were found to need improvement and this was noted as part of the quality assurance program.

A sample of the reusable pads was sent to the national bureau of standards (UNBS) in February for certification and we are awaiting the decision by the bureau. This will allow us to sell a portion of the pads made to generate the funds needed for the Program to be self-sustaining. The trade will target those girls from well-to-do families who can afford to purchase for their children these final products.  The Pads for Schoolgirls Project will still have as a priority the distribution of free pads to poorer girls by the girls in our program.

The project team uses a unique approach by ensuring that each trainee, in addition, does general tailoring and fashion design so that cutting, measuring, designing wings of the pads of various sizes is done. Our goal is that along with the ability to sew reusable  pads, the successful trainee will be able to sew clothes for themselves, children and some school uniforms forms for the students in the community for income generation which will improve the self-sustenance of their future needs.

Documents and an operational license for an independent functional center, which was given the name: Joy Vocational School & Training Centre in Kabatogote village of Kyanamira Sub-county, are pending.

A recent follow-up on the license was made to the Kabale District Local government and also the decision/remarks from the UNBS, but the document and sample verification was affected by the elections and holidays, but they are going to be considered in the near future and feedback received soon.

The girls and women are now able to make various designs of the reusable  pads and clothes especially children’s dresses.

Several of the girls have been facing the challenge of various sickness which has hindered their regular attendance and slowed down the pace towards achieving our set targets.

Three of the sewing machines needed some spare parts to be replaced for malfunctioning and these repairs were done with Buhinja with the help of Doreen and two instructors.

Our goal is to add more trainees so that we can keep our target as it was set at the time of inception.

Read more about the Pads for Schoolgirls Project here.

The Power of Your Hands 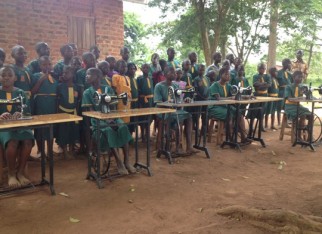